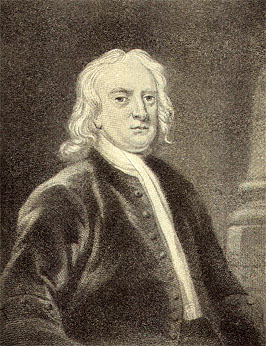 IN 1642, the very year in which the great Civil War broke out between Charles I, of England, and his Parliament, a wonderful man was born, named Isaac Newton.

As an infant he was so feeble that none of his family expected that he would live. If he had been a Spartan baby he would, according to Spartan law, certainly have been put to death. But by extra care on his mother's part his life was saved, and he grew into a lad with more than the ordinary powers of strength and endurance.

He was born in Woolsthorpe, in Lincolnshire, just one year after the death of Galileo, to whom he may be said to have borne a strong mental likeness.

When he first entered school he did not seem to be a very bright lad; but this was because he was not really trying to do his best.

One day a boy who ranked above him in his class struck him a severe blow. This proved to be one of the hest things that ever happened to young Newton; for, feeling that he was no match for the other lad with his fists, he determined to get even with him by beating him in the work of the class. This he soon did; and then he rose higher and higher until he stood above all the other boys in the school.
He spent most of his play hours in making mechanical toys. He watched some workmen who were putting up a windmill near his school; and then made a working model of it and fixed it on the roof of the house in which he lived.
He constructed a clock which was worked by a stream of water falling upon a small water wheel. He also built a carriage and fitted it with levers so that he could sit in it and move himself from place to place. This was, perhaps, the first velocipede ever constructed.
In Newton's day gas lamps and electric lights were unknown. The winter days were short, and it often happened that he had to go to school in the dark. So he made for himself a paper lantern to give him light on his early journeys, and this was soon copied by the other boys.
In the yard of the house in which his parents lived he traced on a wall, by means of fixed pins, the movements of the sun. Clocks were then very expensive, and the contrivance, which received the name of "Isaac's dial," was a standard of time to the country people of the neighborhood.
When he was fourteen his stepfather died, and his mother thought it best for Isaac to work upon a farm which belonged to the family. So he left school; but he had no love for plowing and reaping, or for attending to horses, cows, and pigs.
The sheep went astray while he was thinking out some problem in algebra or geometry; and the cattle got into the standing crops and munched the milky wheat-ears while he was studying the motions of the moon, or wondering what made the earth go round the sun.
His mother soon saw that Isaac would never make a farmer. He was therefore sent back to school and fitted to enter college.
He was the most wonderful mathematician that ever graduated from the University of Cambridge; and, when only twenty-seven, he was made professor of mathematics in the college in which he had studied.
He rose to eminence in the university, and through the influence of some of its leaders he was appointed Warden of the Mint in 1695, and was promoted to the Mastership four years later.
He then moved to London, and went to live in a little house near Leicester Square. His salary enabled him to devote himself to his favorite studies; and this he proceeded to do.
One of the first important discoveries he made was about light. 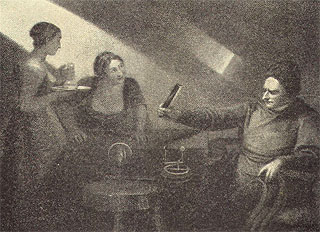 Before his time every one thought that light was made up of fine lines, or rays; bright, but without any color. Isaac made an expriment which any boy can repeat. He bored a small hole through the shutter of a window so as to allow only a delicate pencil of light to enter the room. This made a round spot of white or colorless light on the wall opposite the window; and he set out to examine this spot and see what it could teach him. When he put a glass prism into the pathway of the ray, he found that the colorless spot disappeared.

NEWTON AND THE PRISM

Instead of it he saw on the wall, above where the circular spot had been, a beautiful band of light in which several colors were blended. At the top end this band was blue. At the bottom it was red. In the middle it was yellow.
Newton had thus discovered that a ray of white light is made up of colored rays.
His next experiment was with soap bubbles.
He found that when blown very thin the colors of the light could be more plainly discerned, and he was soon able to count seven distinct tints violet, indigo, blue, green, yellow, orange and red. These are the seven colors seen in the rainbow.
But the greatest of Newton's discoveries was that which is now spoken of as "The Law of Gravitation."
Everybody knew, long before Newton was born, that apples fell from trees to the ground: but no one seems to have asked the question why they never moved the other way.
All boys know that a ball thrown up into the air will come down again: but no one, before Newton lived, had tried to find out why this was so.
At first he seems to have thought that only things that were near to the earth would fall to its surface. But when he thought how the rain drops fell from the clouds he saw that his theory was not true.
Then he thought of the moon going round the earth; and wondered how it kept just so high up in the sky; and why it did not fall like the rain drops. This was a new puzzle and he set to work to solve it.
About two hundred years before Isaac Newton was born, a great Polish astronomer named Copernicus had written a book in which he had said that people were wrong who believed that the sun goes round the earth.
Copernicus insisted that the earth moves round the sun. At the first people made fun of this idea, but by Newton's day they had begun to believe it. Isaac began to wonder if this theory might not help him to solve his problem.
One of the favorite games of the boys of that day was to throw stones with a sling. Doubtless Isaac had himself used one many times in his play.
Now that he was grown up he remembered how he had whirled the stones round and round at a high rate of speed; and yet they never left the sling until he let go one of the strings.
Isaac knew that the moon goes whirling round the earth at the rate of about fifty thousand miles every day; and that the earth whirls round the sun at the rate of about one thousand miles a minute.
Certainly, thought Newton, the moon goes round the earth, and the earth goes round the sun, just as a stone is whirled round in a sling; but there must be something stronger than a cord to keep them in their places.
After thinking about the matter for a long time, he said, the moon is drawn toward the earth by a very powerful force; but she does not come nearer to the earth, or fall upon it, any more than the stone in the sling falls upon the hand of the slinger, because, like the stone, 'she is in rapid motion.
The earth is drawn toward the sun by the same wonderful force that draws the moon toward the earth; yet the earth does not fall upon the sun because it is all the while whirling forward at the rate of a thousand miles a minute.
Newton saw that the force which brings the stone and the apple down to the ground is the very same that draws the moon toward the earth and the earth toward the sun. He called this force "Gravity," or force of weight.
Then his great mind went on thinking beyond the moon and the earth to the far away stars. He soon learned that the same force which keeps the moon and the earth in their orbits, keeps all the stars of the sky in their courses.
For his great discoveries he was highly honored by the learned men of his day. He was made a member of the Royal Society, a society established for the purpose of gathering up and treasuring all forms of valuable knowledge.
The Royal Society aided him in publishing his books, of which he wrote twelve. The most important of these is called the "Principia."
In 1705 he was knighted by Queen Anne; and when he died, in 1727, his body lay in state for a whole week in the Jerusalem Chamber; and was then buried with great pomp in Westminster Abbey.