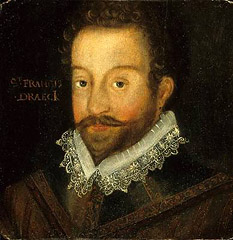 QUEEN ELIZABETH — POPULARLY known as "Good Queen Bess" — ascended the throne of England in 1558. Her reign was both magnificent and successful; and it added much to the greatness of the nation.

It was during Elizabeth's reign that England first became a great naval power; and among the men who helped to make her so, none were more famous than Sir Francis Drake.

There is some doubt about the date of Drake's birth. It is now generally believed that he was born in 1540, though some writers put the date at least five years earlier. The place of his birth was the little town of Tavistock, in Devonshire. He seems to have had a great love for the sea even when but a child.

His parents were too poor to help him into a good position, and so he began his career at sea as a cabin boy. But he had the merit of pluck; and he soon rose to the highest rank in the English navy. 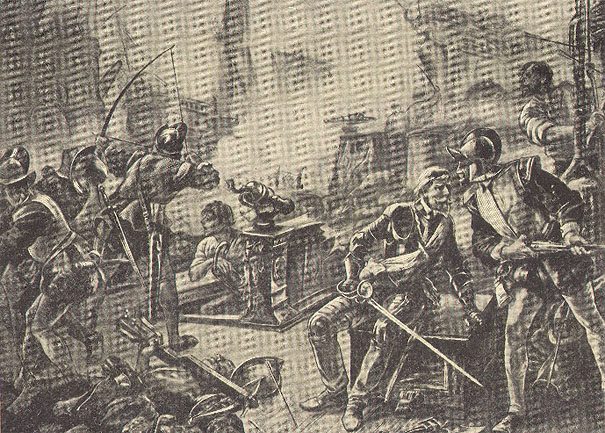 DRAKE AT CADIZ
He was then at Lisbon with thirty English war ships under his command. He at once sailed for Cadiz, and, on arriving, he sent a fire-ship among the Spanish vessels, burned nearly a hundred of them, and escaped from the harbor unharmed.This delayed the sailing of the Spanish fleet for nearly a year, and when at length it approached the shores of England, Drake did more, perhaps, than any other man to bring about its overthrow.The Spaniards had collected about one hundred and thirty vessels of war, and more than fifty thousand men, and to this array they gave the proud title of the "Invincible Armada." Thirty-five thousand men were to land at the mouth of the River Thames and another large force was to land farther to the north. Then a third force threatened the west coast. In this way England was to be attacked at three different points at the same time.

The Spaniards thought that the English would be bewildered, and would surrender.
But all this great armament was not prepared without some news of it getting to England, and preparations were made to repel the foe.
Troops were collected at Tilbury ready to attack the Spaniards in case they succeeded in landing. The queen on horseback reviewed them, and made a stirring speech. The merchants of London and other ports offered their ships to be used as ships of war; the rich brought their treasures; the poor volunteered in the army and navy. Thus the coast was well guarded and the number of vessels in the fleet was increased from thirty to one hundred and eighty.
These carried about sixteen thousand men — not half the number on board the enemy's fleet — but they were sturdy English fighters. Howard was Lord High Admiral, and with him were Drake, Frobisher, and Hawkins, the most famous English mariners of the time.
One evening, late in July, 1588, beacon lights blazed all along the coast of the English Channel telling the news that the Spanish fleet was coming. Next morning, arranged in a crescent, the Armada moved up the Channel. Its line was seven miles long.
The English fleet sailed out from Plymouth. Its vessels were light, while those of the Spaniards were heavy, but more than this, the English ships were finely managed, and their guns were skillfully aimed, while most of the shots of the Spaniards went over the heads of the English.
The Spaniards tried to come to close quarters, but the English vessels were so steered that this could not be done. Day after day for a week the fighting continued.
The Spanish commander then led his fleet into the harbor of Calais on the French side of the Channel. He wished to get provisions and powder and shot. He also wished to get some small vessels — swift sailors — with which he might match the light ships of his adversaries. 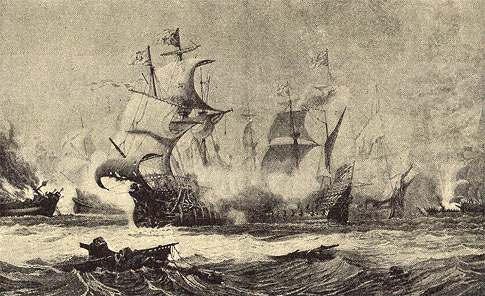 The English fleet followed, but it would not be allowed by the French to attack the Spaniards in the harbor. To force them out into the open sea, the English turned eight of their oldest and poorest vessels into fireships. Tar, rosin and pitch were placed upon them. The masts and rigging were covered with pitch. Their guns were loaded; and thus, all ablaze, they were sent at midnight drifting into the harbor with wind and tide. This fire fleet did its work.

It did not indeed fire any Spanish ship but it so alarmed the Spaniards that they sailed from the harbor into the open sea, and there the English attacked them.

Many of their ships were disabled, and four thousand of their men were killed in one day's fighting.
Next day the Spanish commanders held a council of war. The question to be decided was whether to try to sail home through Howard's fleet or go round Scotland and avoid his guns. It was determined to attempt the voyage round Scotland. So the whole remaining Spanish fleet of perhaps one hundred and twenty vessels steered toward the north.
On the coast of Scotland, there are dangerous rocks, and when the shattered Armada neared the Orkney Islands, violent storms arose, which wrecked many of the ships. Thus nature finished what man had begun — the ruin of the most powerful fleet that ever had sailed from the shores of Europe. Only fifty-four vessels and about ten thousand men succeeded in returning to Spain. About eighty ships had been destroyed, and thousands of men had perished.
Ten years after the destruction of the Armada, Sir Francis made one more voyage to the West Indies. He still cherished the plan of seizing the town of Porto Bello on the Isthmus of Panama, and thus securing the gold and silver brought there for shipment to Spain. 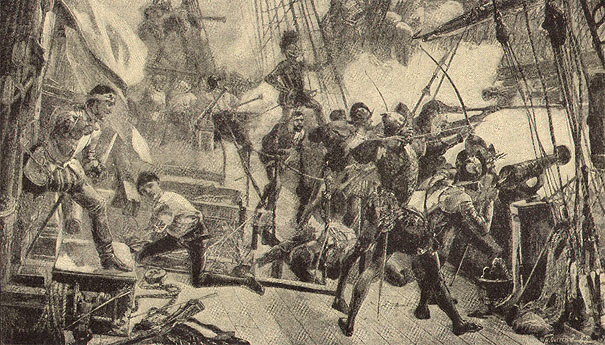 He was, however, again doomed to disappointment. He was stricken with fever, and died on board of his ship, January 28, 1596.
His body was buried at sea. Lord Macaulay wrote these lines in reference to his burial:

"The waves became his winding sheet:
The waters were his tomb.
But for his fame — the mighty sea
Has not sufficient room."
He left no children, but his nephew was made a baronet in the reign of James II. England will always remember with gratitude the services he rendered in the days of her struggle to become "mistress of the sea."